Rob Carter and Ed Gurney – 23h 28m on the 10th July 2015. Rob and Ed are regulars on the European circuit and being Winchester lads decided it would be rude not to have a crack at the Double.

In their own words:

The South Downs Way is an iconic 100 mile ride from Winchester to Eastbourne and for any mountain biker is a
‘must do’ ride.

For us, it has been our training ground for many years and between us we had completed it from one end or the
other over 10 times.

So during winter training rides, when different challenges for 2015 were being knocked around, we kept coming back
to the SDW x2 as the challenge of choice.

At 10 minutes to midnight we met at the statue of King Alfred. Persuaded a chatty taxi driver to take the obligatory
photo and at 00.00 we were off. The strategy was to take the first leg easy to give us a negative split on the way
back!

The first 25 miles to QE Park passed uneventfully – all common training ground, bar the badgers, foxes, suicidal
rabbits and other wildlife trying to get a look in.

Getting ones brain to accept a 200 mile bike ride is a bit hard so we had persuaded ourselves that it was four 50 mile
rides. Much easier!

So after the first 50 miles, at about 05:30, it was time for breakfast. It is amazing how good cold porridge tastes at
dawn on the top of a hill!

It was a pretty warm morning and as soon as the sun came up, we were facing straight into it. Our only mechanical
incident occurred on this ‘second 50’ when a large rock flicked up and took a chunk out of Rob’s rear rotor. Some
aggressive filing with a piece of flint soon knocked the rough edges off and we were on our way again. Random
squeaks and clicks gradually eased as the rotor grooved a new track through the rear brake pads!

We had taken the decision to try and ride all the new adjustments that The South Downs National Park Authority
have added to the route so no turning around at the end of the golf course, instead we carried on down to the sea
front and the official Eastbourne start/finish at the west end of the prom.

It was 11:30 when we arrived and we were being cooked. It was like the Med!

As we arrived on the prom we feared there had been a serious accident as we were greeted with about 50 assorted
emergency vehicles with their blues and twos giving it full effect. It turned out it was an emergency services display
for the tourists. Bizarre!

With two lots of 50 done we had just enough time for a fast lunch and then back up the hill. It was 11:45, one
hundred miles left – the hardest part had just begun!

To make the ride home just that little bit harder than the outward trip, we were facing the usual headwind from the
south west. On the plus side there was a Macmillan sponsored walk heading in our direction so a few gates were
held open for us by various kind walkers!

At Itford Farm YHA, 18 miles from Eastbourne we took the decision that we needed some proper rehydration
otherwise we would be in serious trouble. So the ‘self-supported’ element of our ride was set aside in favour of the
urgent need for two ice cold bottles of Pepsi!

This pepped us up for the next climb but the conversation started to quieten as we were starting to slip behind our
24 hour target time.

The eastern fifty of the SDW are far hard than ‘our’ end and it is not until you have crossed the fourth river at
Amberley that you feel you have made much progress.

The third 50 was celebrated with a quick sandwich in the same location as we had enjoyed breakfast about 12 hours
earlier and then we knew we really had to work hard to make it back inside 24 hours.

Neither of us mentioned the p* word as we knew one flat and we were in big trouble. Fortunately the flints behaved
themselves and we kept on rolling.

We started to pick up the pace wherever possible and really took advantage of the flatter sections.

We arrived at QE Country Park at 9pm via the new improved ‘high route’, cycled up Butser, just, and then we were
on the home straight.

This leg usually takes 1 ¾ hours, but with 180 miles in the legs (& over 7000m of climbing) and still the risk of a
mechanical or puncture we pushed on as quickly as possible.

The climb up Beacon Hill from Exton (familiar to us all as the SDW is on the road at that point) had us digging deep.
Every mile was hard work and familiar trails seemed harder than ever before.

Eventually Cheesefoot Head arrived and only when we rolled onto the asphalt at the top of Chilcomb Hill did we
allow ourselves to think that we might actually make it in time.

A quick dash down Chesil Street, (hoping not to be stopped by the police as we had both lost our rear lights by this
stage) and we were home, arriving back at King Alfred at 23:28!! 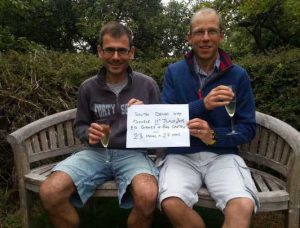 The food we consumed: (It’s all about variety!)