It may just be a collection of hills and fields and chalk and earth but the South Downs is a special place. It changes subtly from one end to the other in it’s 100 miles and the more I ride it the more I want to return. It’s a slight obsession for me which may partly explain the appeal of riding it twice and doing the South Downs Way Double. This, and the huge personal challenge of actually completing it are just about the best excuse for a 24 hour bike ride that I can find.

There’s a history to this ride. All those wonderful fools that have ridden it before – supported, non-supported (alpine), singlespeed, 3 times in one go(!), 4 times in one go(!!). It’s mind boggling how this patch of earth has inspired people to push themselves so far and in the process inspire others like myself to give it a go. The double tends to be ridden on a mountain bike but my own attempt to join this club was going to be on a CX/Gravel bike.

I have my own history with the double. 3 weeks prior to this attempt I rode the double on my cross bike with 33mm tyres in a time of 23 hours and 23 minutes. That experience was not enough to put me off, in fact the opposite. I felt that with a different bike and less crashes I could get a better time. Thanks to Rory from Upgrade Bikes I was able to borrow a Tripster ATR for a new attempt. Titanium, gravel-eating lushness. Any excuses I had to not beat my own time had to be really good ones now.

The first few hours of my attempt went perfectly. I started late in the afternoon and rode into a beautiful sunset looking across at the miles of downland hills I had to ride. The bike was handling sweetly and I felt really good, cockily thinking I would take an hour off my time at least. Fast forward a few hours and it all started to unravel. Some navigational errors resulting in some extra hills to track back and a missed water tap at Cocking slowed me down (yes, I missed the Cocking tap). An all consuming tiredness set in. I tried walking a bit, sitting down a bit, anything to shift the empty feeling. Just. Keep. Going. I lost a lot of time in that wibbly wobbly zone between 2am and 5am. My earlier pace had me on course for a good time but now I wasn’t even sure I would finish let alone do it in less than 24 hours.

Dawn arrived and things started to improve. Rory had started following me around again that morning to document my attempt and in between taking pictures of me suffering on hills (thanks Rory) was passing on messages of support from friends. I couldn’t quit this thing now. The rest of the day was just a case of bashing out miles, albeit slowly. There were some highlights amongst the pain. I had some company for a bit (thanks Laura!) and my friends Simon and Adam came out to see me through the home straight (no drafting/no opening gates). Adam, I’m sorry you had to watch me nearly puke on Newtimber Hill. 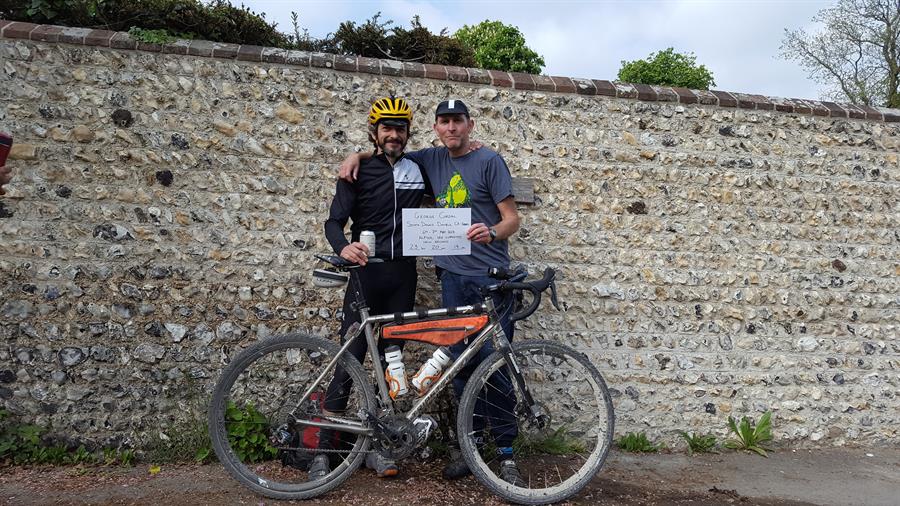