Unbelievable ride by Bill and he is just 15 years old!!

Bill Balding – 17h 45m 11s on the 14th September 2019. What can I say, the second fastest time to date and Bill is just 15 years old. What potential this young lad has, a future outright record holder perhaps? Check out Bills Strava ride

So the reason I decided to do the double, was because I really wanted to get into solo endurance racing, but kept getting rejected from 6, 12 and 24hr races as a soloist because of my age and insurance reasons. Instead of deciding to wait until I’m 18 (3 years away), I decided to give the SDD a go in the meantime.
In the lead up to the ride, I got a bunch of good training in – including a 24hr race as a pair with my dad. I tried to learn the route as best I could and get a feel for the trail by doing long rides out from Brighton to various points along the SDW and back. What really helped my fitness for this attempt was doing a couple of multi-day bikepacking trips as trying to grind your bike up steep, off-road climbs with a bloody heavy bike really builds up the strength in your legs.
For nutrition I used SIS and Clif gels, a few flapjacks and a bunch of Nakd bars. Worked brilliantly.
The plan for the double was to start at 4 in the morning from Ditchling Beacon and head out to Eastbourne first as I wanted to get the majority of night riding out of the way early on, on trails I know well. I used an Exposure Race and Joystick as they’re relatively lightweight, and illuminate the un-technical nature of the South Downs Way perfectly. This meant that I arrived at Eastbourne with an amazing sunrise at around 6:20. I was well above my 20 hour goal pace by quite a bit so thought to myself that I’m going out way too hard, and that I was definitely going to regret it later. But what the hell, I just decided to carry on with that pace and see what happened.
Arrived back at Ditchling Beacon at 8:50, still above pace and pushed on towards Winchester. Legs were feeling good until I reached Cocking, where various aches and pains flared up (knees in particular). Something in my head just told me to get on with it, despite the pain – so that’s what I did.
Hit the halfway point 8 hours 45 minutes into the ride, and so far had only stopped for 15 minutes or so (including gates and water stops), so knew I was still above target pace.
104 miles in, I was at the bottom of Butser hill, and knew that once I’d passed it, there would be no more significant climbs between me and Winchester; that meant I had around 40 miles of slightly easier pedalling, so that was a mental relief. By the time I got to Winchester, my legs were aching pretty badly, but now I was heading home. Checked my Lezyne GPS, and to my surprise, I was still going faster than 20 hour pace: I was on for 18 hours.
The pace was very gradually starting to dip, but when I reached Cocking, I figured out I was around 15 minutes behind Josh Ibbett’s old SDD record pace (I had a printout of various other people’s SDD times and average speeds needed to achieve them stuck to my top tube). It’s at this point when I decided to chase down Josh’s time. I’m glad I now had a specific time to chase – that was really motivating. Without it, I’m sure my average speed would have continued to drop. This meant I had 44 miles to close a 15 minute gap.
Gradually, the average speed started to rise and by the time I reached Botolphs, I was just behind Josh. From the bottom of Truleigh Hill, I started full-on pegging it, determined to close that gap. I had one hour to cycle 10 miles. On fresh legs, that’s perfectly do-able, but 182 miles into a ride, that would be hard. Almost crashed into a suicide badger going down the east side of Truleigh at this point, it was the fourth one I’d seen on the ride.
I can’t remember suffering so hard in my life for 10 miles, but I just kept drilling it.
I made it back to the Beacon with a time of 17:45:11, beating Josh by 2 minutes 20 seconds. That was easily the hardest thing I’ve ever done, and I’m absolutely delighted with my time. I set out with the goal of beating 20 hours, and achieving that by 2 hours 15 minutes is a great feeling. What I’ve learnt for next time, is don’t carry too much food – I was carrying around a kilo of dead weight. 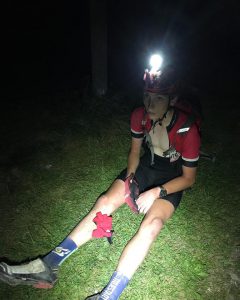 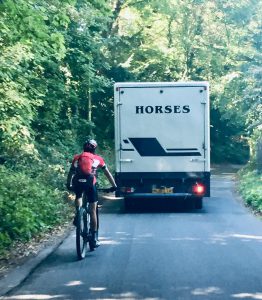 What I took for the double –