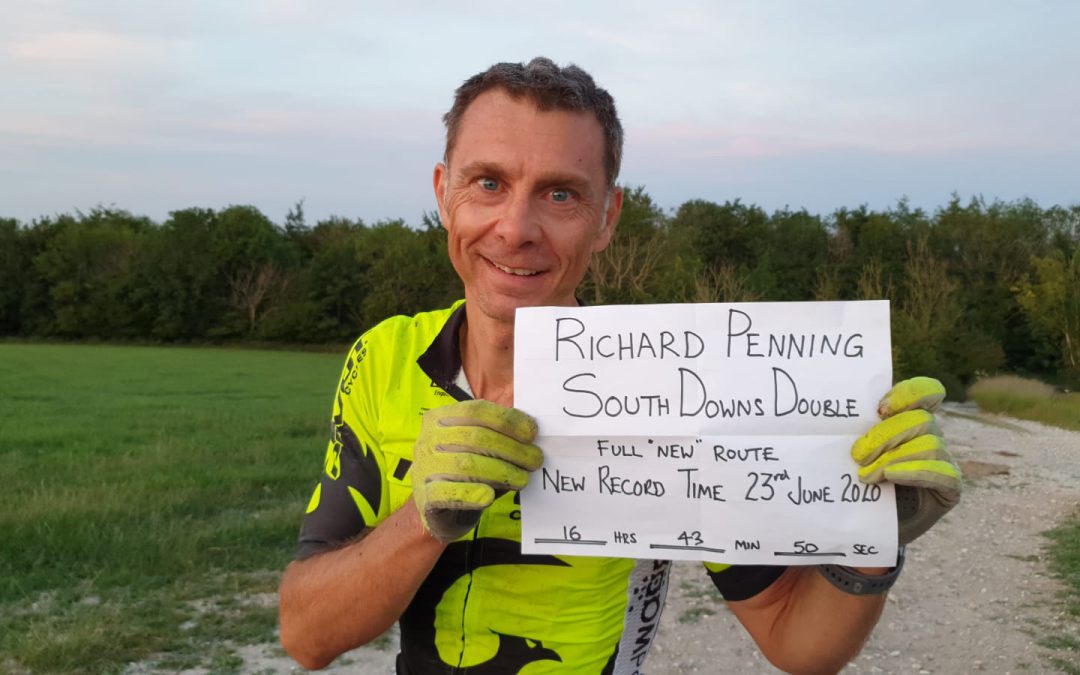 I was first introduced to the south downs double when a friend from work, the ever enthusiastic Rob Dean, was building to one of his double attempts about 10 years or so ago. I thought it was a crazy idea… and seemed like a long miserable slog of a ride.

I didn’t think any more about it but then in 2016, another cycling buddy, Ian Leitch, did the double in a phenomenally quick time of just over 15 and a 1/2 hours. Definitely not a long slog

Still, despite having a number of long endurance races under my belt at this point, I wasn’t overly keen on having a go (especially as Ian had now set the bar incredibly high… 🙂 )

Fast forward to the end of 2019 with a good winter of training and racing and had forged a vague plan to have another attempt at the 24hr nationals, with possibly a south downs double ride in early May as a training ride as part of a very unstructured training plan…

However things got changed up a bit with this global pandemic thing you might of heard mentioned in the news.

Lockdown put a stop to long training rides for the month of April and some of May so I stuck to shortish local rides and spent time on the turbo. It also meant that I ended up with a fair bit of annual leave to use by the end of June which seemed like the ideal time to give the double a go.

Looking at the long range forecast the best day (well the only day where the relentless wind seemed to die down..) was the first Tuesday of my days off (23rd of June)

I was actually getting quite excited about the ride in the day running up to the attempt; often finding myself visualising the various sections of the route and notable turns or gates in my head.

So at 4.30am on that day, I set off down the SDW from Bury Hill, crossing the river, and headed up Amberley mount; making sure not to go too deep on any of the early climbs by trying to keep power below FTP

Trusting the forecasted high temperatures later on in the day I didn’t take any spare clothing; preferring to be slightly cold at first light in just my jersey and shorts. In the end, as soon as I left the river mist of the Arun, the temperature was more than warm enough.

This first leg to Eastbourne was really pleasant, with fresh legs and cooler temperatures, with the iconic views of the south downs ridge stretching out into the distance. I actually really like the longer steady climbs in this half of the SDW compared to the short more broken climbs of the western end (and the view are just magnificent!)

As I climbed up out of Southease I saw a figure crouching down to one side of the trail. I’d presumed that it was a keen photographer keen to make the most of the early morning light in what was shaping up to be a beautiful day. However as I got closer I was somewhat surprised to see the familiar figure of Rory Hitchens; despite me giving very little forewarning of my double attempt, he’d managed to intercept me on his way to work. With his shouts of encouragement in my ears, I put my head down and focused on maintaining a nice steady pace.

Before I knew it I was in Eastbourne. Now just after 8.30am with very few people about, mainly just early morning dog walkers. Despite being early the temperature was already 21degC!

As I turned around at the kiosk café the light south easterly wind now became a slight aid rather than working against me.

I made good time back to Brighton. I had stuck a printout of Ian’s times on my top tube, for different hourish long sections from his record ride; not necessarily to try and beat his time, but I knew if I could keep within a few minutes of the times for each of segments I should be able to beat the 16h30m target that I thought I could realistically achieve. I was pleasantly surprised to find that I was actually putting in faster times for some of these sections and closing down the lead he had from his blisteringly fast start.

It was about 1pm as I passed north of Brighton and the temperature had risen to almost 30degC. This part of the route is fairly close to where I live so it was nice to have some encouragement from friends and family at a couple of points along the route.

As the day warmed up I increased my fluid intake and refilled my bottle more frequently, stopping at the Adur and then again at Washington (despite having a half full bottle) as I knew the next tap in Amberley was not working. This led to what proved to be very long hour and a half stretch in the high temperatures until the next water refill was at Cocking . My stomach definitely wasn’t happy with the warm dregs of my water bottle as I rationed out the water I had, until I finally got to the refill my bottle again.

After this I struggled a bit to keep my power up, despite trying to maintain my effort levels, the next section was very much a question of just keeping going without worrying to much about my speed. By this point I was well into the final third of the ride so managed to convince myself it was the home stretch (despite still heading away from my start point…)

Butser hill was probably my lowest point. I don’t mind the climb that much, it is just a bit of an unrewarding grind.., but it is also quite exposed to the sun and I was really suffering in the heat. As a bonus, having reached the top, I was rewarded with a puncture! I quickly plugged the hole and topped up the air with my mini-pump and was on my way. I only lost about 3 minutes or so but this was the longest stop of the ride.

For the next hours the focus was definitely on continuing to make progress rather than worrying about outright pace. Whilst I was aiming for a fast time, more important was to get it done.

Fatigue was setting in as I made my only navigational error in missing the turning off the road at the top of Exton hill. All a sudden the road didn’t look familiar, so I turned back to find the path. As I headed back down the road I saw a cyclist I passed at the bottom of the hill heading up towards me. Hmm, maybe I hadn’t missed the turn and in my tired state had just misremembered the road…? So I turned around again and headed back up the hill. A minute or so later I arrived at a junction I definitely didn’t recognise. This was confusing..
Then another possibility occurred to me, perhaps the other cyclist wasn’t following the SDW… weird.
Turning around to retrace my steps for a second time, I headed back down the hill until I got to the missed turn off. A good 5 mins or so wasted but at least I was back on the right track.

The rest of the stretch to Winchester and then back to QEP went by without incident. Running somewhat on autopilot I was counting down the remaining efforts needed to get to the end. Getting Harting Down out of the way and arriving at the Cocking tap I knew I only had two relatively easy climbs left. Bouyed by this thought and the finally dropping temperatures, I could increase my effort levels.

As I started the last climb up to Bignor I began calculating what my finish time might be. It was looking to be something like 16h45.
A bit slower than the 16 hours that I thought could be possible and outside the 16h30 target I had set myself.
I had a vague recollection that the second fastest outright time was a 16h40 something so put my head down to try and see how close I could get to it.

As I neared the end I looked around and realised just what a fantastic evening it was. The sun was starting to make its way down to the horizon; painting the downs that beautiful golden colour.

Then all of a sudden it was over. The familiar figures of my family along with Rory came into view and I was at the finish and done. Final elapsed time 16h 43m 50s. A new record for the current signposted route (and second fastest time overall! )

Double details
When preparing for the double I found it useful reading up on other people’s experiences and strategies that they used for the ride and since have had questions about various details of my ride.

Start
I started at 4.30am which was half an hour before sunrise.

It was probably light enough to start at least 15 minutes earlier than I did.

I started from Amberley which is about 25mins from my house and pretty close to the middle of the SDW and headed west to Eastbourne first.

I kept stops to an absolute minimum; my moving time according to Strava being only 10 minutes shorter than the elapsed time, which included fixing one puncture.

Food all in two stuff caddies on the bars and top tube bag.

Jersey pockets empty, aside from phone, and used to store empty wrappers (later moved to one of the bar bags once that was empty)

Phone – used to listen to music and to share my location on google maps.

I don’t carry inner tubes ever…

Tyres were a close to brand new set of 2.25 racing ray/ralphs

Food
For nutrition I stuck to what I know works for me from long training rides and races.

Also had a few electrolyte tabs loose in the side pocket of the top tube bag to pop in the water bottle whilst refilling without losing any time.

Water
I don’t drink that much when riding so first after leaving Amberly the first refill was the Jevington tap, and then didn’t need to stop again until passing the Falmer tap as I headed back west.

As the day warmed up I increased my fluid intake and refilled more frequently, next at the Adur and then again at Washington, despite having a half full bottle, as I knew the Amberley tap was not working.

This meant the next water refill was at Cocking which proved to be very long hour and a half in the high temperatures. My stomach definitely wasn’t happy with the warm dregs of my water bottle as I stretched out the water I had, until I finally got to the Cocking tap.

The west end of the SDW used to be barren in terms of water taps, but recent years have seen a surfeit of new taps being added from which gave me an abundance of options to replenish my bottle; from which I refilled at QEP then Lomer Farm, and then on the final return leg at Chilcomb, Meon Springs and finally Cocking again.

Fitness and training
In the run up to the double I did a number of long training rides along the SDW.

Starting from the Adur I did some out and back loops to QEP, Eastbourne and Winchester.

During lockdown, much of my training was much shorter sessions on the turbo. 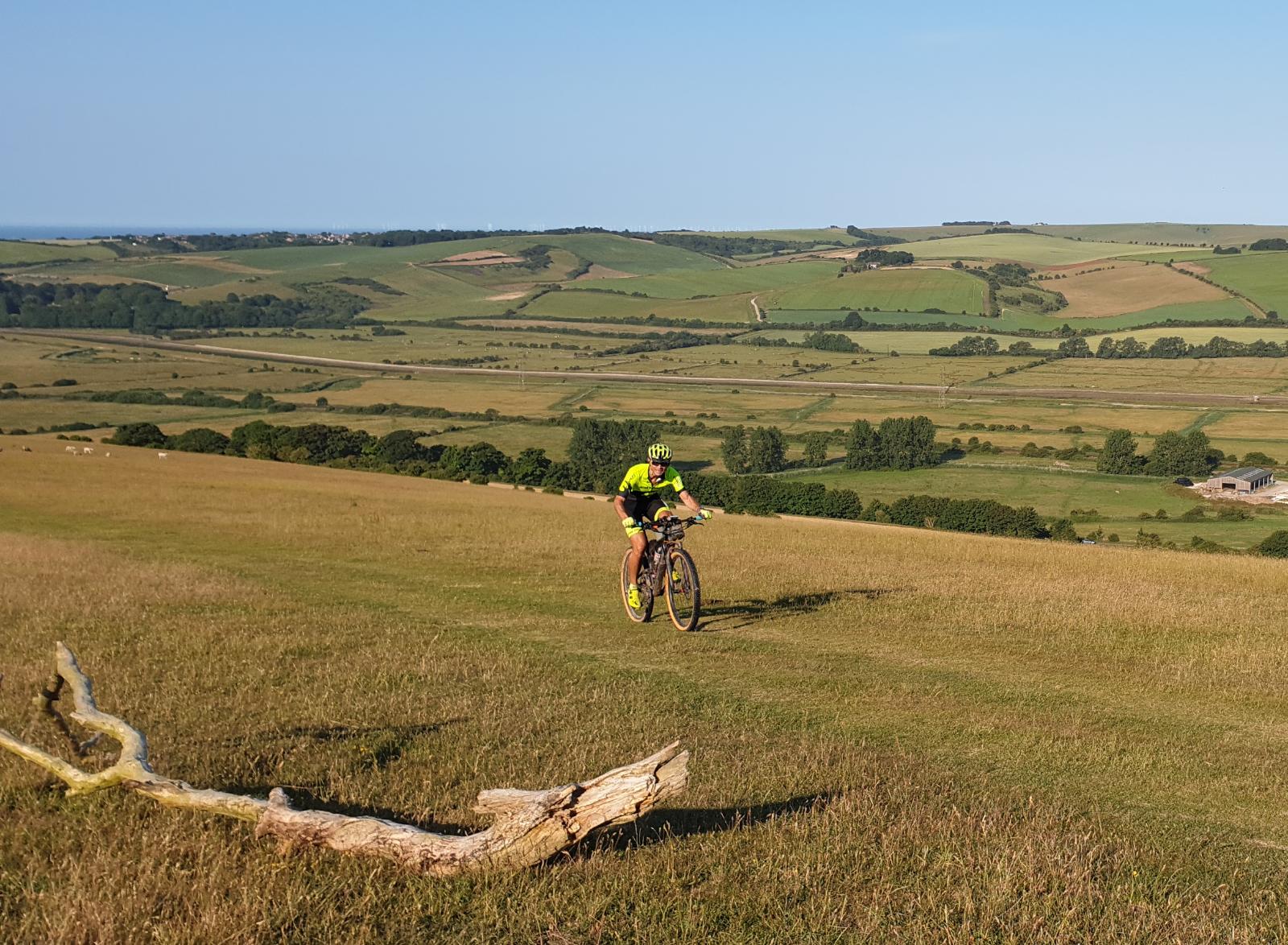 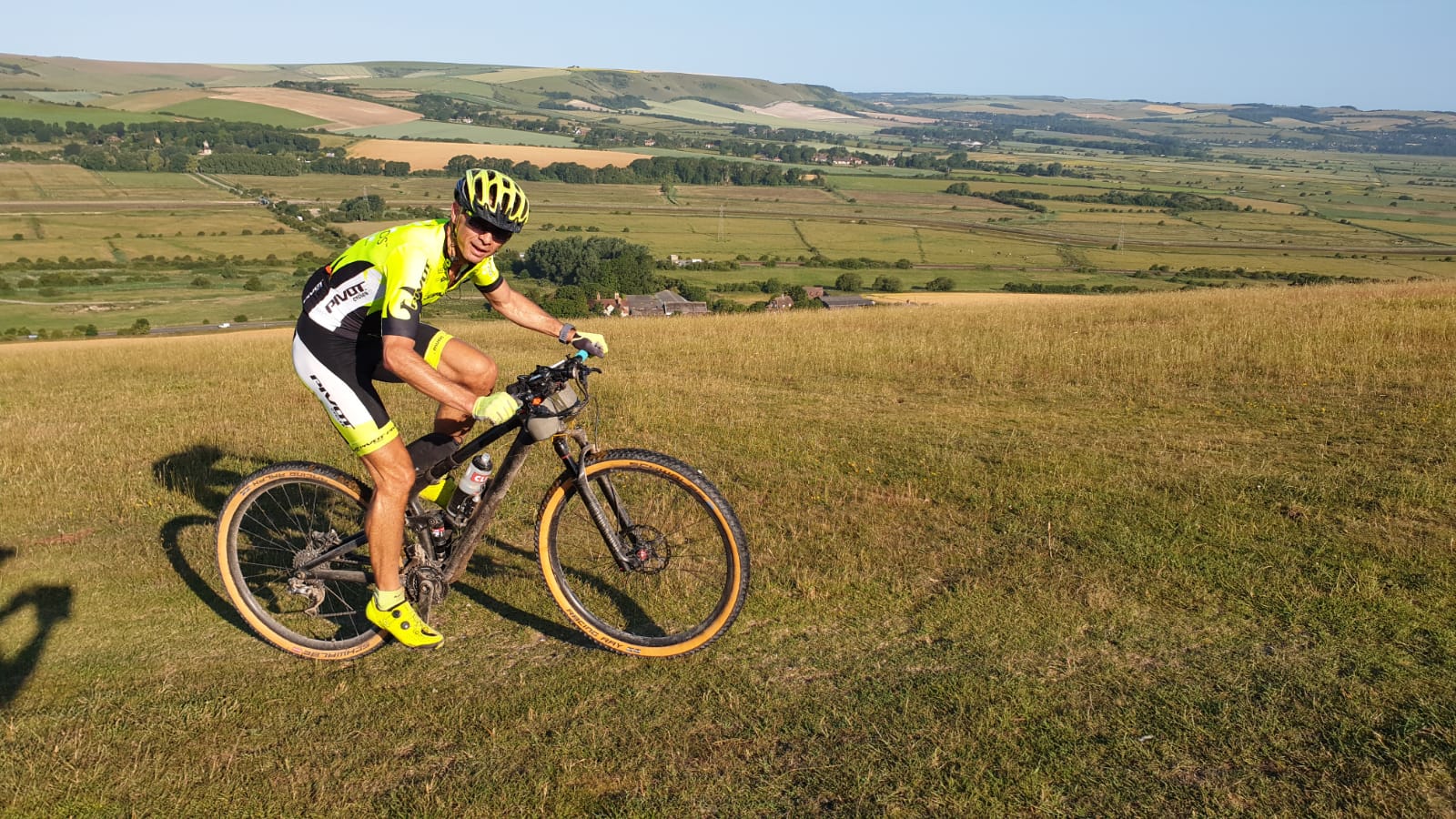 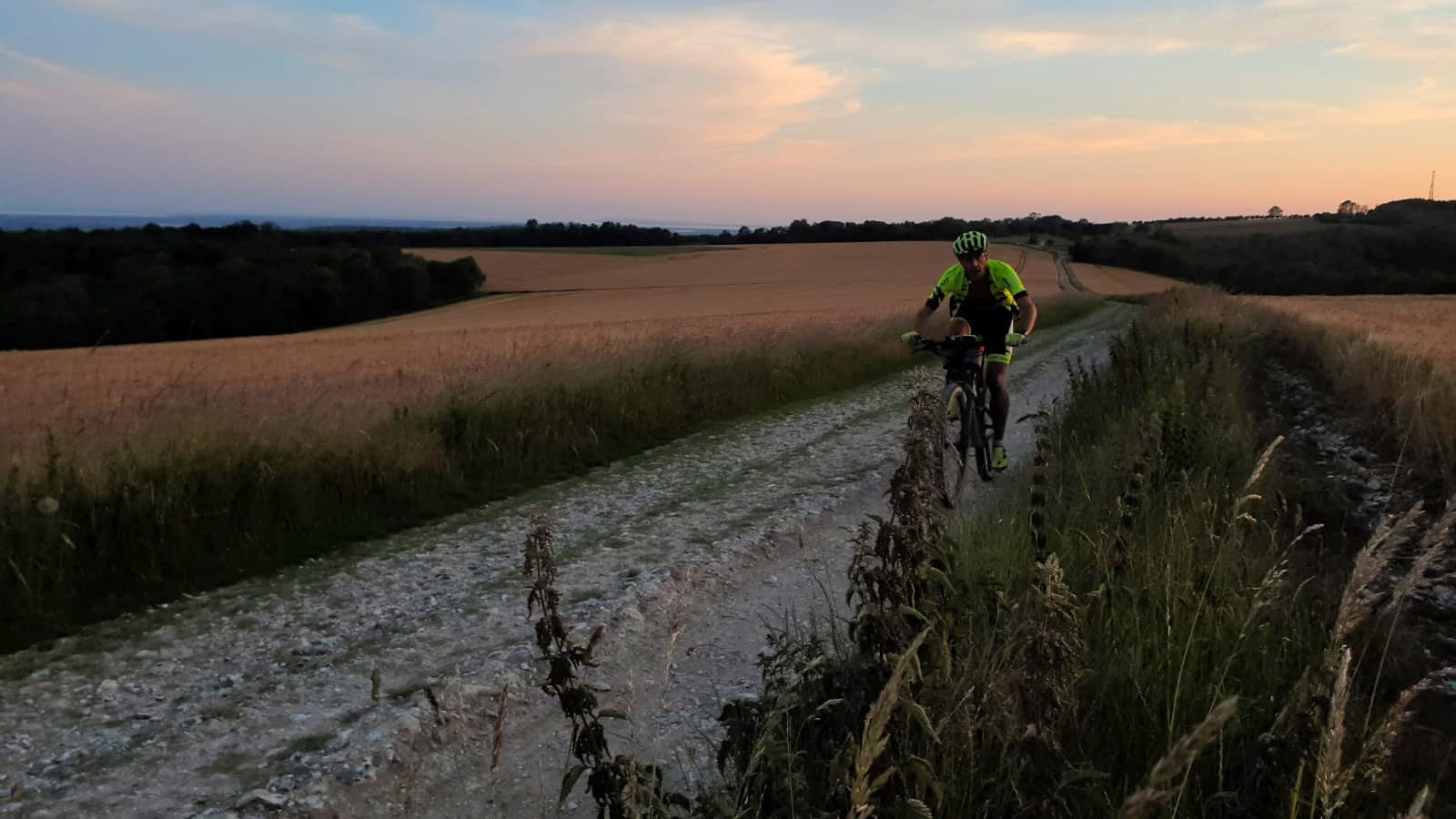