I’ve lived on the edge of the South Downs National park for over 15 years now and spent quite a bit of time riding road bikes, mountain bikes and gravel bikes on its simply beautiful trails, lanes, and byways. I have done several single rides across the South Downs Way and it’s fair to say that completing the full length in a single day can be challenging especially if the conditions are not in your favour.
I stumbled across the South Downs Double website years ago and immediately had the urge to give it a go one day, but I was in no doubt that it would be a serious undertaking. Since then I have attempted this ride 3 times on each occasion having catastrophic tyre failures from the sharp flint or mechanicals that brought the ride to an end. I know now that being mostly a roadie, I was not doing myself any favours with tyre pressures / tyre choice.
On Friday 2nd July 2021 I finally managed to get my act together and complete the ride. I decided to start from Amberley at around 4am on a Friday hoping that the trail would be quiet and that if everything went to plan, I may be able to finish before complete darkness.
Apart from a slightly worrying puncture in the rear tyre after only a couple of kilometres the ride went as planned up until approx. 130km when I started cramping quite badly which prevented me from pedalling at all. I developed a strategy to ease the cramps when they came by standing on the pedals, stopping to stretch, walking the really steep bits and just generally not pushing hard at any stage. This unfortunately hit my average pace quite significantly and it became clear that my desire to finish before darkness was not going to happen.
I was determined to keep going and just settled on the approach that as long as I could still pedal and keep moving then I would do so. I had time in the bank after a reasonable pace over the first half, so I just kept spinning along to Winchester.
I turned at Winchester before darkness and started the final section back to my start point in Amberley. I did find it quite amazing that despite having ridden the route only a few hours earlier in the other direction there were sections I didn’t recognise. The darkness undoubtedly contributed to that, but it also brought with it some magical moments with what seemed like an abundance of wildlife including owls, deer, badgers and rabbits.
Although nowhere near the sort of time I was hoping for I am so very glad that I pushed on to complete the ride. I found the whole experience such a brilliant challenge and would recommend giving it a go but perhaps don’t take my advice on tyre setup 😉
Finally, I want to say a very big thank you to my wife and family for putting up with me training for this and being totally obsessed with it for the days coming into the ride. Big thanks to all my training buddies and Mark Davis for his support on the training plan as well as coming out to take some videos during the ride. Rory and Julian, thanks for the help and advice. 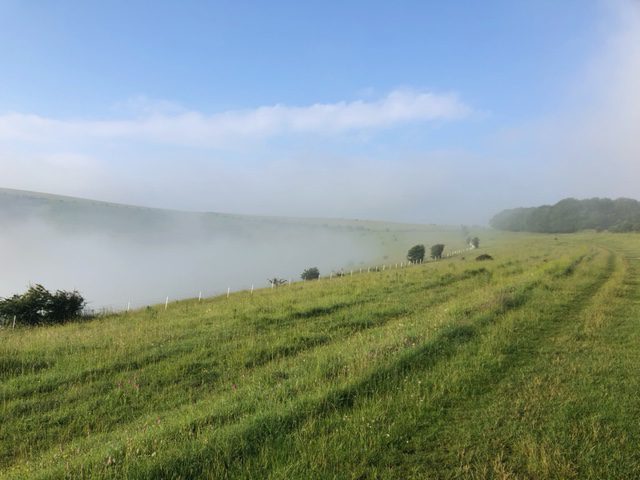