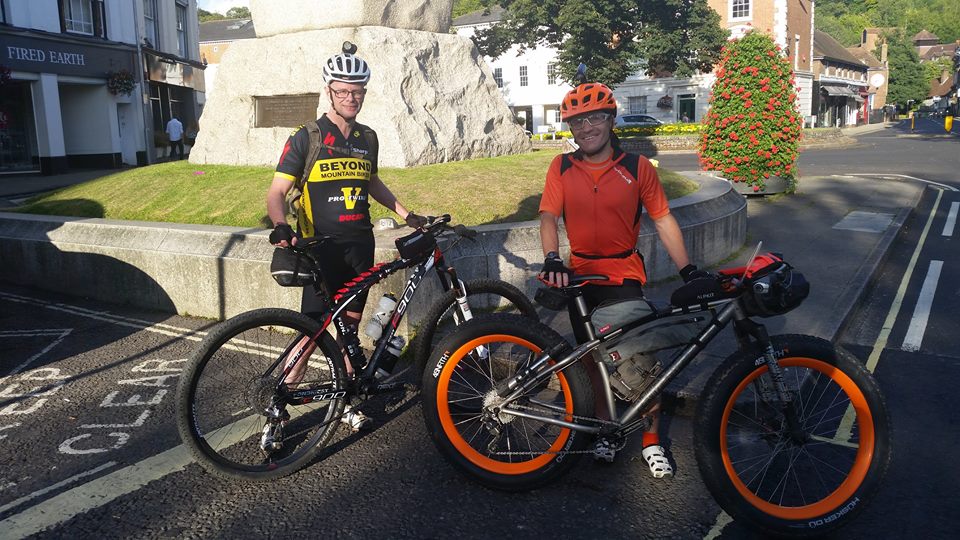 Julian Paphitis – 23h 2m on the 1st August 2015. Perfect weather for Julian and by sheer coincidence Frazer was also attempting the Double! In Julians words:

The decision to go for the double was fairly last minute, after an unsuccessful race in the Salzkammergut Trophy – Austria, I needed to prove something to myself. Saturday the 1st of August was the date I chose and was only a week away. The South Downs Way Double as the name implies involves riding the length of the South Downs Way twice, out and back. You can start at either end or in the middle, but I decided on a Winchester start, meaning the last quarter of the ride would be on the less hilly section.
According to the South Downs Double website only 18 people have ever completed the ride in under 24 hours, it is an exclusive club! You can attempt the ride either supported or unsupported, aka Alpine Style, both are solo efforts. I went for Alpine style, meaning I would have to carry enough food with me for 24 hours of riding, only using public taps found along the route for water. A good friend Nick Evans was on standby, at the end of a phone, during the night should I get into difficulty. Riding through the night solo on the South Downs was a daunting thought! But that’s the deal and risk you take with this challenge.

I contacted previous Double member Number 7 and Redhill legend – Richard Sterry for advice and tips and he put me in contact with Rory Hitchens, the South Downs Way Double adjudicator. No going back now, I was committed! I decided to start at 7.00pm in the evening so I could get the night ride out of the way while fresh.

I had a week to prepare, getting lights sorted out. I went for a Diablo on the helmet and an Equinox on the handlebars, both with single cell piggy back batteries. The Diablo was left at the same setting throughout and the Equinox flipped to high beam on the descents.
A single water bottle is enough due to the amount of public taps. Food consisted of gels, bananas, chocolate brownies, ham sandwiches and scotch eggs for a savoury change at the half way point. I was going to wear a Camel Back without bladder, to store food and safety related items – foil blanket, first aid kit, extra inner tube. My saddle bag had a decent waterproof jacket and my tools in. The plan was to throw the Camel Back in the bin at the half way point, as I could carry enough food on me for one half.

I turn up at the King Alfred statue in Winchester to be greeted by a stag party in high spirits and Fraser who amazingly was doing the double as well! Fraser was on a fat bike, fair play to him! My preparations were all over the show due to the attention from the revellers, especially getting the course loaded to the Garmin and clearing my head for the task ahead.
After taking a few pictures for the revellers we set off together at 7.00pm, but soon split as I was doing the classic route. This put me ahead, and all night I could see Fraser’s lights flickering a couple of miles behind me – it was comforting to know there was someone behind me if I should crash.
I’d set myself a max heart rate, pacing is key in this type of event, but I felt so good it was all I could do to hold back, but broadly managed to. As day turned into night the most amazing sunset was upon me, the South Downs boast some of the most spectacular views in the UK as far as I am concerned. The night brings out many creatures, rabbits, rabbits and more rabbits, apologies to the one that jumped into my spokes, the prognosis would not have been good, sorry buddy. Badgers and of course cows and sheep, also bats flying into me, must have had the radar turned off. Bugs galore and the sound of snails crushing beneath the tyres, I did my best to avoid them, honest!
At 40 miles, nightmare scenario, gashed side wall in the tyre, no amount of Stans was going to fix this leak. 15 minutes later toothpaste tube was in place to stop the inner tube bulging out. It was getting cold now, so on went the arm warmers. I set off again, but this was a big psychological hit, with thoughts of running out of inner tubes uppermost in my mind.

At about 2:30am I see lights in the distance, is that cyclists? Yes it is, 3 of them, doing the double? I shout, yes well we are certainly trying anyway they reply, that gives me a boost. They like to party in Sussex, I see and hear about 3 massive parties, also a couple of people in sleeping bags in the middle of a field in the middle of nowhere.

By 3:30am I could see signs of light on the horizon and by 4:30 it was light enough to turn the lights off, the view of mist in the valley was awesome, but by now I had hit the wall and was not able to appreciate the sun rise in all its splendour. My thoughts had turned to Fraser now, was he OK, perhaps we would meet on the return leg?

I get to the Kiosk cafe that marks the end/start of the South Downs Way in 10h 40m; right on schedule. I’m not feeling good at all, my appetite has completely gone, I can’t eat any of my savoury food that I had for the turnaround short break. The thought of doing that all again was beyond comprehension.
I had planned to throw the Camel Back in the bin at this stage, but it was still cool and I wanted to have the savoury food on me in case my appetite returned, with not enough room to carry the savoury food, the Camel Back was staying for the time being.
This challenge is mental just as much as it is physical. I was just going to have to grind it out, so I set off, the climb out of Eastbourne is grassy and steep, the last thing you need. After about 20 minutes I meet Fraser, it was good to see him, but he was struggling, and who would blame him on a fat bike. He said he would probably bail out, I tried to encourage him not to.

By now I’m not sure if I can do this, thoughts of bailing are in my mind, do I call to be picked up? I think well lets at least do a bit more, it would be less of a drive for Mike, my backup man during the day. After about 130 miles I am feeling so bad I lie down for a 10 minute rest, this worked a treat as I got a second wind after that. By this stage I’m setting myself mini goals – if I can just get to Devils Dyke then I’m not far from the youth hostel, which means downhill on the road section and down Truleigh hill to the water tap at Botolphs, this sort of thinking really helped and that’s how I continued.
By now I would take 25 or 26 hours, I just wanted to complete the ride. I had a little laminated card I’d made with average speed needed for certain times, I now realised that I’m still on for a sub 24 hour time, this was a big boost!
I’m just surviving on gels now, I’m sick of them but I force myself, I’m running out, but in the end I had just enough. This does not stop you worrying though, the smallest thing can play on your mind. Also the hallucinations are starting, I’m seeing people in my peripheral vision, what’s that all about!
Finally I get to Amberly, this marks the halfway point on the return leg, a big boost. From now on the strategy is to spin/walk up the hills and give it full beans on the flat and even more on the descents, I’m taking big risks, but my race head is on and I don’t fear the danger, as I over take other cyclists I hear wow look at that nutter, I feel good.
My average speed is telling me that I may go sub 23 hours, wow I think that would be amazing. I get another boost and take even more risks, but I’m feeling confident on the descents, I’m as one with the bike and in the zone, a great feeling!
The mini milestones pass and at last I think I can actually do this. The remainder of the ride is uneventful and I arrive back in Winchester in 23 hours and 2 minutes, just missing the sub 23 hours mark, that dam puncture!