Epic ride by Justin and Tim for a good cause 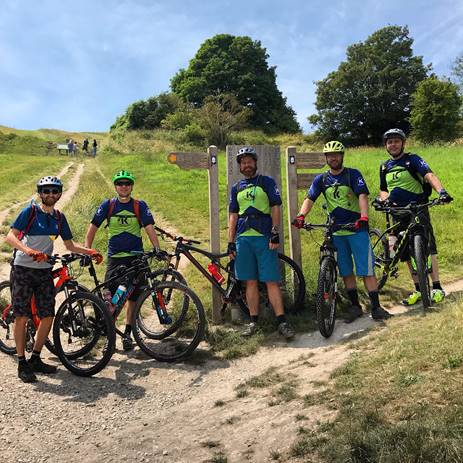 Justin Carrick and Tim Jones – 30h 1m on the 13th July 2019. A personal challenge for Justin and Tim makes for an adventure of a lifetime. In Justin’s words:

What an adventure that was! Am elated to have completed this challenge, and amazed I did!

At around this time last year, my younger sister was diagnosed with breast cancer– she’s doing ok thankfully, but has undergone a pretty torrid time over the last 12 months, both physically and mentally. It seems such a common disease now, and perhaps just from having an increased awareness of it, it seems incredible as to just how many people are impacted. I thought it would be a nice idea to have a suitably testing challenge to raise a little money for Breast Cancer Care. But it had to be a reasonably tough challenge….so we set out to conquer the South Downs Way on a bike. Twice. Without stopping. To put that in to context – that is 200 miles and 24,000 feet (322km and 8,000m) of distance and climbing. This is off-road terrain too. No smooth tarmac roads!

5 of us set off from Eastbourne Station at 1.30pm on Friday and 2 of us rolled wearily back in to Eastbourne at about 7.45pm on Saturday evening. 2 had to quit at Winchester, and one having to throw in the towel at 120 miles as was dangerously falling asleep while cycling. A quick powernap didn’t help him unfortunately. We had a couple of guys with fresh legs join us at Winchester as part of the British Heart Foundation “Way in a Day Ride” (I quickly slapped on my number in Winchester, turned around and joined the official ride to raise some cash for the Heart Foundation as well).

I’m new to the endurance game! The biggest ride before this was 100 miles. so doubling it was a big unknown. The psychological side was as hard as the physical side, although I went through periods of nausea and not feeling I could eat, energy levels falling off a cliff in an instant – only to feel back to full power after “proper food”. I was ready to quit a few times, but my riding buddies pretty much refused to let me. Ended up breaking the return legs into manageable chunks. Amberley at 150 miles / Devils Dyke where I met my family for a motivational cuddle and a punnet of strawberries / Being swept home by some local riding friends for the last part of the ride.

You see some bizarre things at night. Surprising amount of people out doing all manner of things at 3am. The most unusual being 6 guys in tuxedos, partying in the middle of nowhere at 4am. Not even close to a road…..just in the woods, partying hard! How did they get there? Where had they come from?! It will remain a mystery.

Other moments of note… The great views of the Spinnaker Tower in Portsmouth, the blood moon and the sunrise over a poppy field just outside of Winchester.

There were some very dark times….really wanting to quit, but somehow I kept pedalling. But I certainly would not have made the ride without the tremendous support – so thanks to everyone who popped up along the way in some capacity. 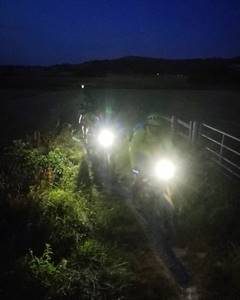 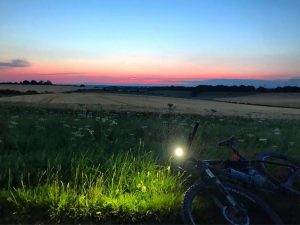 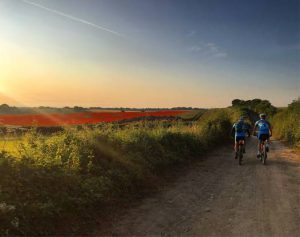 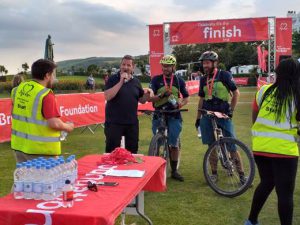